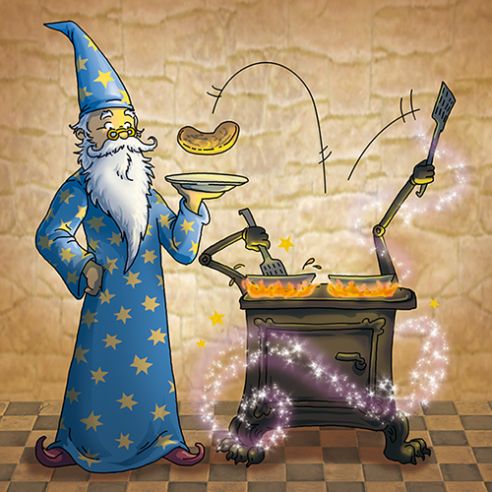 One of Morty’s favourite events is Pancake Day. Every year on Shrove Tuesday, people in many countries eat pancakes and so they do in Ivybridge – they eat lots of pancakes. Morty likes his pancakes best with a bit of honey. This year, Uncle Godfrey has a surprise for the people in the Great Hall of Ivybridge Castle: His very own magic pancake machine! It has two frying pans on top and two hands to flip the pancakes. He switches it on and immediately magic dust sparkles in the air. Batter magically fills the frying pans and the machine bakes the pancakes. When the first pancake is done, one arm of the machine flips it up into the air and it lands right on Morty‘s plate. The next pancake is for Malcolm and he catches it with his big mouth while it is still flying. With a broad grin, he happily eats it – yummy!

Uncle Godfrey is very glad that the machine works so well because when he first tested it in his laboratory, it would not stop throwing pancakes in all directions. After ten minutes, the whole laboratory was covered with pancakes and it took Uncle Godfrey a long time to clean up the mess. Betty had to help him get the pancakes off the chandelier and the tall shelves. One pancake had even landed on top of his telescope! He only became aware of it a couple of days later when he wanted to look at the night sky and wondered why the moon had turned to such a yellowish brown colour…

Now Uncle Godfrey is extremely happy. He holds out his plate and the machine flips a freshly baked pancake on it. Then he joins his family and friends at the table and enjoys the hot
and tasty pancake.

Have a very happy Pancake Day!

Morty and Friends Back to the story overview