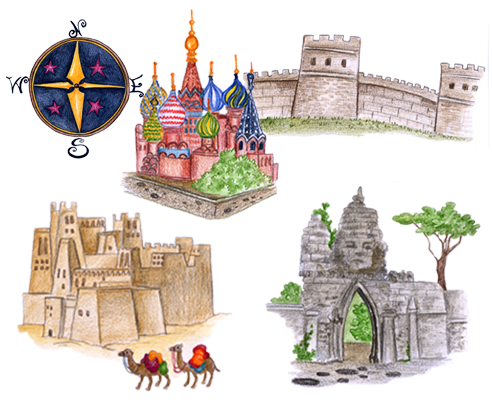 With Mortimer, children and adults all over the world are learning English in a playful way! But there is more to it: Because they are traveling so many countries, Mortimer himself and his friends also learned a lot. For example that the name “Mortimer“ looks differently in some other countries and sometimes very unfamiliar to how people in Germany, France or Poland write.Our letters which you learned at school are called „Latin script“ but there are many other alphabets with letters that look unusual to us, and – as Betty thinks – are very decorative.

In Russia and Ukraine where people use cyrillic letters, “Mortimer” looks like this:

In many countries of the former Sovjet Union, the cyrillic alphabet is used exclusively. And in Beijing in China, Morty’s name is written like this:

By the way, the Chinese writing system is over 3000 years old and therefore the writing system with the longest uninterrupted tradition in Eastern Asia. The inhabitants of the insular state of Sri Lanka in the Indian Ocean even have two official notations: In the languages Sinhala (above) and Tamil (below)

These are the two national languages of Sri Lanka. They are spoken by the two largest ethnic groups, the Sinhalese people and the Tamil people.

As a little joke, Malcolm wrote yet another version of “Mortimer”: In the fabulous script of the elves from the famous book “The Lord of the Rings”.